The famous chicken or egg story is a perpetual dilemma throughout the history of humanity. Yet the existence of chicken and egg remains as intact as it used to be. The chicken lays egg and egg makes chuckling or visa-versa. Between the egg and chicken, there is no controversy or no dichotomy. It is the human mind that has the controversy and dichotomy of who precedes what? There is a perfect harmony and rhythm between egg and chicken. It is quite natural to their being itself. It doesn’t matter egg precedes chicken or chicken precedes egg as long as there is no threat to the existence of either of them. Looking at from a liberalistic perspective, probably both precede each other or may not be also.
Unlike the chicken and egg dilemma, modernity is faced with challenges of religions adherents and their fanatic theism which uproots the existence of thousands in Iraq, Syria, Libya and other such regions. Life has no value compared to religion. Religion becomes the game changer to those persecutors and persecuted.   Nobody is ready to loosen the fanaticism from their mind letting the stubbornness as their master. And the net result is life gets eliminated from the phase of earth. How can we justify the massacre and genocide that occur in the name of faith and religion?

What is important – life or religion?
Religion can only make sense when your existence is intact. Religion is sedative hope antidote offering temporary cessation from pain and suffering. It is not a permanent cure ― just temporary, built on a great capsule called hope ― hope of the hopeless; choice of the choiceless; refuge of the refugeless. Hope is good; a great tranquilizer which helps humanity to aspire for when all doors in the life are shut. Hope never shuts the door to its mansion. Everyone is welcomed to dine in the ever expanding mansion. Hope has no boundary and no scarcity of space. As dreams are unlimited, hopes are very hopeful bottomless pit or roofless roof. Human mind is so whimsical that never understands the witch as it is preoccupied with the plight of survival of the fittest.

Life is LIVING
Life is LIVING in its fullness. Celebrating the liveliness of life is LIVING. Awareness is the key to living life. Often in the daily chores of life neglect the awareness from living.
Man is totally free to think and feel what he wants. Freedom is the expression of awareness in living. Without awareness from can never be experience. Awareness can only free the mind from shackles of fanaticism and religious bondage. Humans who are aware of the existence of their life will certainly transcend beyond religions than ignoring it or giving up. Because, religion has a great capsule which everyone needs some time or other in life. Religion will remain a great predator to the existence of humanity with its hope capsule. Humanity has been using it in some form or other from the time immemorial, and will continue till the eternity. However, the mere awareness of life precedes everything else will help us to transcend beyond stubbornness and fanaticism opening more neural pathways to freedom.

Can a human being live life without religion? When you life is at a stake in the name of religion, what is religion for?  If your existence is not there what is your religion for?        By         Joji Valli 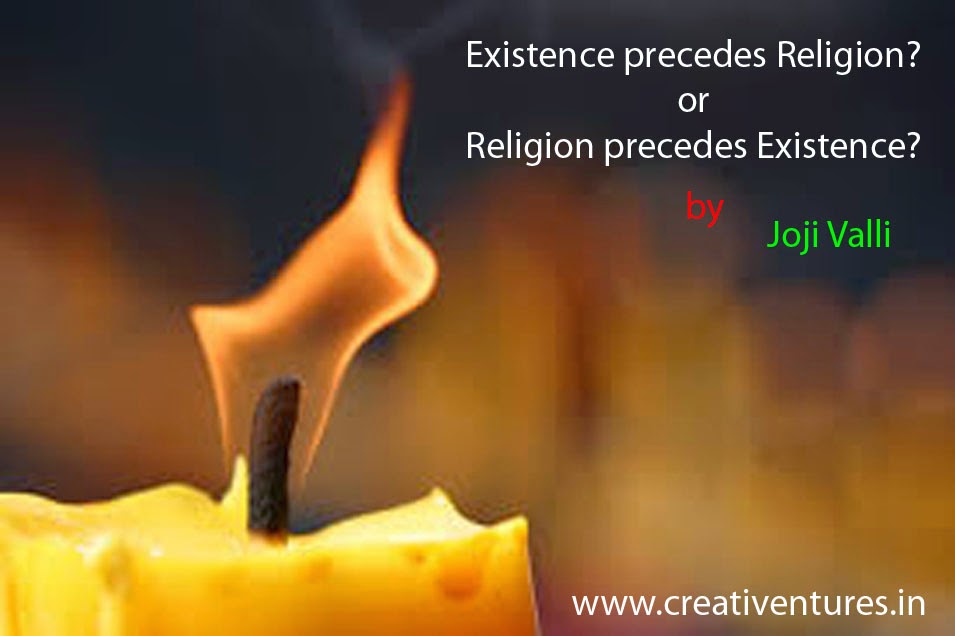 Posted by CreatiVentures Publishing at 10:52 PM